Monsanto and it's weedkiller Roundup is back in the news, this time not for falsifying glyphosate carcinogenic test results, but due to the poisoning of Dutch drinking water. According to the Dutch water company Vitens 50% of it's customers use Roundup in their gardens not realizing that this herbicide eventually ends up in their drinking water. This is not to mention the widespread and intensive use of Roundup and other herbicides in modern agriculture. The Dutch Institute for Health and Environment (RIVM) found that a quarter of the wells it tested were contaminated by Roundup residues. The RIVM says there is no reason for concern but as we noted in our previous post; based on a study by King's College, London the current acceptable levels for glyphosate in drinking water are way too high. The only acceptable level of glyphosate and other herbicide residues in drinking water is zero. 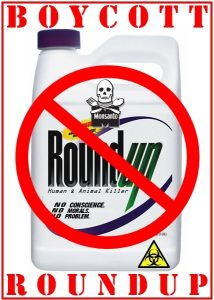 We cannot expect any protection from the powers that be. The European commissioner for Health and Food Safety sees no need to ban Roundup as according to him "the science is divided on whether Roundup is carcinogenic". The European Chemicals Agency (ECHA) has recently found glyphosate not to be a human carcinogen which contradicts the findings of the World Health Organization. It's quite apparent to even the casual observer that although the science may seem to be divided what seems to be even more the case is that the regulatory agencies appear to be compromised as evidenced by the California court case we highlighted in our previous Berkey blogpost.

In any caseVitens and other Dutch water companies are setting a good example by suggesting to all their customers to not use Roundup or Imex as a weedkiller in their garden. In the meantime using a Berkey water filter will keep your drinking water pure and prevent you and your family being exposed to a wide range of chemical contaminants.