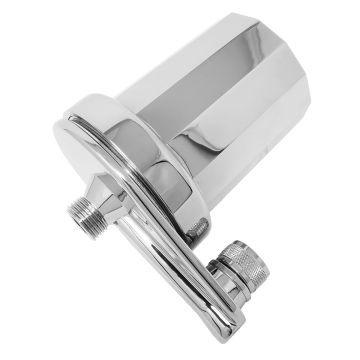 Effective for both hot and cold water

Reduces damage to hair and skin

The newly improved Berkey shower water filter is easy to install, removes chlorine, eliminates all undesirable odors and makes showering the pleasant experience it should always be. Significantly reducing chlorine, hydrogen sulfide, and iron oxide (rust) the Berkey shower filter gives you the benefit of showering in clean filtered water without the adverse effects of chlorinated water. Simply screw the Berkey shower water filter in between the shower pipe coming from your wall and your existing shower head or between the tap and shower hose and you're good to go!

Since chlorination is a long established public health practice necessary for the disinfection of drinking water, people are aware of the health benefit drinking filtered water can provide. However, it's surprising for some people to learn that 50% of their daily exposure is in the shower. The other 50% comes from their drinking water. Therefore, removing chlorine from shower water is equally as important as filtering drinking water. In the shower environment, chlorine can either be in liquid or gas state. At higher water temperatures in the enclosed shower stall, free-chlorine moves from the liquid to the gas state, where it vaporizes and subsequently is inhaled.

Documented scientific studies (see below for extracts) conclude that taking long hot showers is a potential health risk. In the enclosed shower stall chlorine vaporizes upon which it is inhaled. To a lesser degree, absorption through the skin also occurs. Medical studies suggest a link between absorption and inhalation of chlorine in the shower environment with elevated risks for disease and serious illness. Showering in chlorinated water may also cause pre-existing conditions such as asthma and eczema, to become exacerbated.

How the Berkey Shower Filter works

Using a patented blend of high purity calcium, copper and zinc, the Berkey Shower Water Filter works on a similar principle as a catalytic converter in a car. In shower filtration free-chlorine is converted into a harmless chloride. The scientific name for this chemical reaction is known as "Reduction-Oxidation", commonly referred to as Redox. Simply stated, during a Redox reaction electrons are transferred between molecules, creating new elements. For instance, when free-chlorine comes in contact with the filtration media, it is changed into a benign, water-soluble chloride. This reaction changes free-chlorine to a larger chloride element, too large to evaporate or be absorbed by the skin. It is then carried harmlessly through the water supply.

In addition to the benefits of filtering water, there are cosmetic benefits. Symptoms of chlorine exposure are dry and/or flaking skin, dry brittle hair and red irritated eyes. Filtering your shower water reduces these symptoms!

"Showering is suspected as the primary cause of elevated levels of chloroform in nearly every home because of the chlorine in the water."
Environmental Protection Agency - Dr. Lance Wallace

"Taking long hot showers is a health risk, according to research presented last week in Anaheim, California, at a meeting of the American Chemical Society. Showers - and to a lesser extent baths - lead to a greater exposure to toxic chemicals contain din water supplies than does drinking the water. The chemicals evaporate out of the water and are inhaled. They can also spread through the house and be inhaled by others. House holders can receive 6 to 100 times more of the chemical by breathing the air around showers and bath than they would by drinking the water."
New Scientist - 18 September 1996 - Ian Anderson

"Studies indicate the suspect chemicals can also be inhaled and absorbed through the skin during showering and bathing... Ironically, even the Chlorine widely used to disinfect water produces Carcinogenic traces... Though 7 out of 10 American drink chlorinated water, its safety over the long term is uncertain... Drinking chlorinated water may as much as double the risk of the bladder cancer, which strikes 40,000 people a year."
U.S. News & World Report – July 29, 1991 - Is Your Water Safe – The Dangerous State of Your Water

"Scientists found there was a higher incidence of cancer of the esophagus, rectum, breast, and larynx and of Hodgkins Disease among those drinking chlorinated surface waters... Volatile organics can evaporate from water in a shower or bath... Conservative calculations indicate that inhalation exposures can be as significant as exposure from drinking the water, that is, one can be exposed to just as much by inhalation during a shower as by drinking 2 liters of water a day... People who shower frequently could be exposed through ingestion, inhalation and/or dermal absorption."
Is Your Water Safe to Drink? - Consumer Reports Books - Chlorinated Drinking Water Linked to Cancer

"A new federal analysis concludes that chlorinated drinking water may pose a cancer risk to humans, particularly the risk of bladder cancer.

The report by the Laboratory Center for Disease Control, made public yesterday, is based on an exhaustive review of dozens of studies carried out over recent years in Canada and abroad. The review has already spurred the Federal-Provincial Drinking Water Committee to re-examine existing standards for levels of chlorine by-products (CBPs).

Despite the undisputed benefit of chlorination in controlling infectious diseases, the epidemiological studies indicate an elevated incidence of bladder cancer among those who have been exposed to chlorinated drinking water for long periods. "If you put those two lines of evidence together I would say it comes out as a probable link (between chlorinated water and cancer)," said health department expert Donald Wigle, who wrote the review.

He said a task force would test drinking water in hundreds of communities across Canada to determine precisely the current concentrations of chlorination by-products. The task force will also survey equipment and practices at water purification plants across the country to determine how costly it would be to lower the current limit on the chemicals.

One of the most effective ways to reduce concentrations of the chemicals is to use filtration. But many communities, especially smaller ones, don't have up-to-date filtration systems. Wigle said a new standard, if one is deemed necessary, probably won't be proclaimed until late next year. He said consumers could protect themselves from the risk by using household water filters or drinking bottled water.
November 21, 1999 The Toronto Star - Task force to conduct tests in hundreds of communities - Ottawa (CP)

How long will the Berkey Shower Filter last for?

How do I install my Berkey Shower Filter?

What are the benefits of a Berkey Shower Filter?

The newly improved Berkey Shower Water Filter is easy to install, removes chlorine, eliminates all undesirable odors and makes showering the pleasant experience it should always be. Significantly reducing chlorine, hydrogen sulfide, and iron oxide (rust) the Berkey shower filter gives you the benefit of showering in clean filtered water without the adverse effects of chlorinated water. 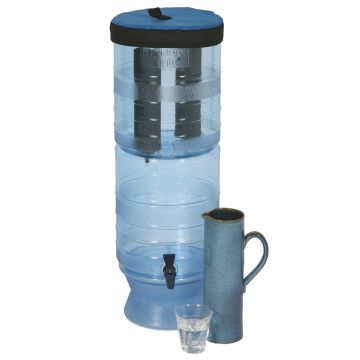 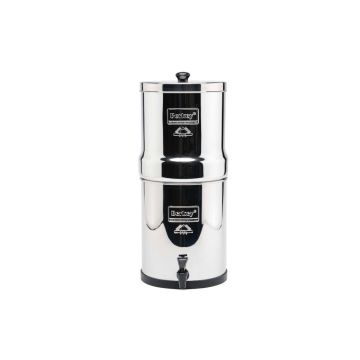 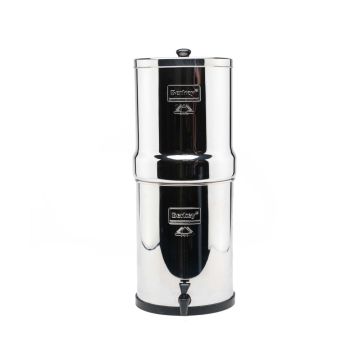